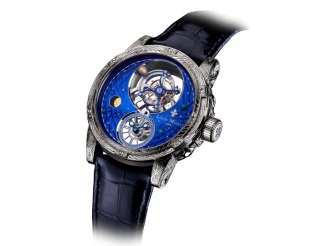 the key to cosmic secrets!

Space Mystery is the world’s first “satellite tourbillon®”: the cage is balanced by means of a planet that rotates around it. And this is just one of several exclusive Louis Moinet features in the piece: Space Mystery also includes authentic fragments of a mysterious meteorite from the far-flung regions of space that holds traces of amino acids* – possibly one of the first forms of life in the universe. This unique Fine Watchmaking composition is showcased on a dial in Magic Blue – a colour whose exact composition remains one of Louis Moinet’s closely-guarded secrets. With Space Mystery, the Ateliers founded in his honour have added a poetic dimension to their vocation – and provided unprecedented heights of watchmaking emotion.

“The origin of the carbonaceous CM chondrite meteorite is a mystery. The presence of non-terrestrial amino acids could indicate that it originated outside our solar system over 4.5 billion years ago,” explains Jean-Marie Schaller. “This was an exceptional creative catalyst for us – and represented a huge responsibility, too. It’s not every day that you get a chance to display the origins of life in the Universe.”

An outsize tourbillon is located at 12 o’clock. Its balance wheel and bridge have been crafted in authentic Louis Moinet style; the upper part is in blued titanium. The tourbillon cage, boasting an exceptional diameter of 13.59 mm, hangs suspended in mid-air, 1.8 mm above the dial. Not only does this satellite tourbillon – also exclusive to Louis Moinet – rotate on its own axis, it is itself in orbit, as is its very own satellite planet, revolving every 60 seconds. What is more, contrary to existing off-axis tourbillons, the axis of rotation of the Space Mystery tourbillon is not the same as that of the hours and minutes hands.

At 9 o’clock sits Space Mystery’s most singular aspect of all: an aperture in the dial houses an authentic fragment of the amino acid meteorite. “What we have here is something that goes beyond watchmaking alone,” concludes Jean-Marie Schaller. “It’s a universal message. Here, the subject is life itself; our very own origins. Space Mystery is much more than a journey; it’s a quest for meaning: where did we come from? Space Mystery contains a tiny glimpse of an answer to a question that transcends humankind.”

The Space Mystery case is entirely hand-engraved and hand-polished. On either side of the crown, each caseband will include two other authentic fragments of heavenly bodies – one from Mars and the other from the Moon. There will be four editions of Space Mystery, each comprising 8 watches (2 in white gold, 2 in rose gold). 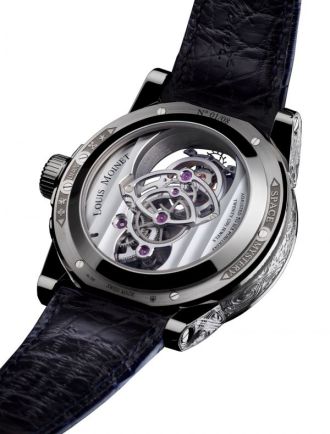 Amino acids are organic compounds that play a vital role in the cell structure of all known living organisms. To date, some 500 different types of amino acid have been identified. Only 140 are capable of producing proteins, 20 of which form part of the makeup of human DNA. They all contain the four basic elements of life: carbon, oxygen, hydrogen, and nitrogen.

The best-known CM chondrite is the Murchison meteorite that fell to earth in Australia in 1969. Analysis of the meteorite has led scientists to conclude that it alone contained over 200 different amino acids – the probability that it contains the first traces of non-terrestrial life is thus non-negligible.

Nobody yet knows exactly where this meteorite came from. The presence of non-terrestrial amino acids could indicate that it came from outside our solar system, over 4.5 billion years ago. Another theory is that it came from a comet, or from the asteroid belt between the orbits of Mars and Jupiter.